CATCH UP ON THE LATEST

CATCH UP ON THE LATEST

On August 8, 1907, the first professional engineering license was issued to Charles Bellamy in Wyoming.  Other states began to follow suit.  Between 1921 and 1947, all states passed registration laws for engineers, and by 1970, all 50 states and the five legal jurisdictions of the United States had laws regulating the practice of engineering. 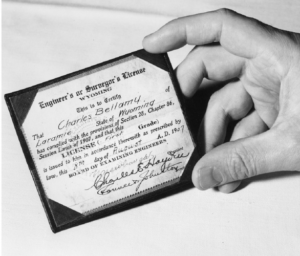 Since that time, licensure has expanded and professional engineers across the U.S. have made the commitment to protect the public health, safety, and welfare.  According to the National Council of Examiners for Engineering and Surveying, there are now more than 886,000 P.E. licenses in the U.S.